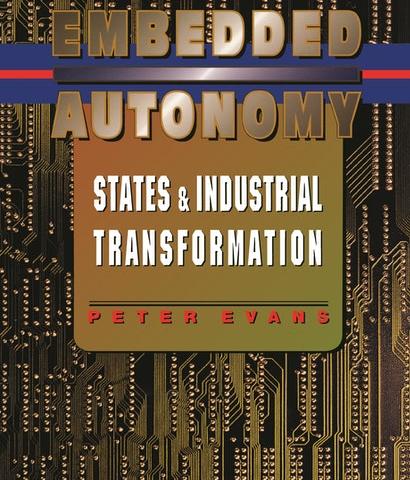 "In recent years, debate on the state’s economic role has too often devolved into diatribes against intervention. Peter Evans questions such simplistic views, offering a new vision of why state involvement works in some cases and produces disasters in others. To illustrate, he looks at how state agencies, local entrepreneurs, and transnational corporations shaped the emergence of computer industries in Brazil, India, and Korea during the seventies and eighties.


Evans starts with the idea that states vary in the way they are organized and tied to society. In some nations, like Zaire, the state is predatory, ruthlessly extracting and providing nothing of value in return. In others, like Korea, it is developmental, promoting industrial transformation. In still others, like Brazil and India, it is in between, sometimes helping, sometimes hindering. Evans’s years of comparative research on the successes and failures of state involvement in the process of industrialization have here been crafted into a persuasive and entertaining work, which demonstrates that successful state action requires an understanding of its own limits, a realistic relationship to the global economy, and the combination of coherent internal organization and close links to society that Evans called “embedded autonomy.”"