Essays in trespassing: economics to politics and beyond

Autoría: Hirschman, A.
Citación: Hirschman, A. (1981). Essays in trespassing: economics to politics and beyond. Cambridge: Cambridge University Press. 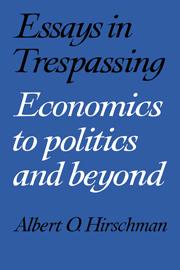 "This book brings together fourteen articles and papers written by Albert O. Hirschman. About half deal with the interaction of economic development with politics and ideology, the area in which Hirschman perhaps has made most noted contributions. Among these papers are 'The Rise and Declines of Development Economics', a magisterial and yet pointed essay in intellectual history and his famous article 'The Changing Tolerance for Income Inequality in the Course of Economic Development'. Hirschman's ability to trespass - or rather his inability not to trespass - from one social science to another and beyond is the unifying characteristic of the volume. Authoritative, searching surveys alternate here with essays presenting some of Hirschman's characteristic inventions, for instance the 'tunnel effect' and 'obituary-improving activities'. Three of the papers have not been published previously and a number of introductory notes have been especially drafted for the present volume to evoke the intellectual-political climate in which certain groups of essays were written."